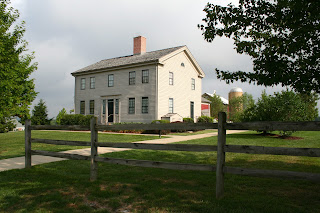 The John Johnson Farm is in located in Hiram, Ohio

I was very unfamiliar with this home and farm in Church History, yet very familiar with events that  happened there.  I knew the history just didn't know WHERE .  That is what was so great about this tour we went on, it helped connect stories and history I have heard my whole life to the actual places they happened.   I had a lot of things mixed up in my head.
The John Johnson Home was the headquarters of the Church for a certain time period. I  learned that pretty much where ever Joseph was living at the time, became the center of the Church.  Which makes sense.

What happened in the John Johnson home? 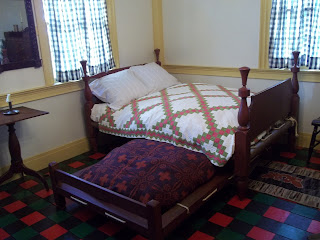 Joseph and Sidney were invited to come live in the John Johnson home for a quiet, peaceful place they could work on the translation of the Bible.  Soon Emma joined with their 4-month old twins Joseph and Julia.  Sidney and his wife Phoebe with their 6 children moved into a log home across the road.

This is the room where Joseph and Emma lived with their twins. Notice the very colorful floor.  The Johnson's were wealthy and their home was decorated in the latest and best fashions of the day. It was a very comfortable home to live in.

Saturday, March 24, 1832 Emma and Joseph had spent the day caring for their now 11 month old twins, both suffering from measles.  By nighttime, Emma went to bed with Julia. Joseph stayed up with little Joseph, who was the more ill of the two. Joseph layed down on the trundle bed near the door and quickly fell asleep.

During the cold night, a group of men with black-painted faces burst through the door. Emma screamed as they dragged the Prophet from his bed.  During the attack, baby
Joseph was left uncovered long enough to catch a severe cold and died a few days later.

Sidney Rigdon was also dragged by his heels, his head thumping on the frozen Ohio ground.

They threw tar on them and feathers.  Both of  the men were unconscious for a while afterwards, due to to violence of the act. Sidney worse off than the Prophet.  He suffered bad head injuries and was delirious for days afterwards.

After the mobbing Joseph pulled the tar from his mouth so he could breath. He made his way to the house. When Emma saw the beaten and tarred Joseph, she fainted.  Elsa Johnson and Emma stayed up most of the night, scraping tar from Joseph's skin.

Though Joseph had lost a tooth, received a severe injury in his side, was missing a patch of hair, and had nitric acid burns, he preached a sermon at the usual Sunday worship services.  Afterwards he baptized 3 members of the congregation.
We had a wonderful guide that joined our tour from  the John Johnson farm to Kirtland: Karl Anderson. You might be familiar with several of his books on the Doctrine and Covenants and the revelations that happened in Kirtland.[search them out at Amazon.com] He is a former CES Seminary teacher who is in his late 70s. A jolly guy who was fun to listen to.  He has lived and taught in Kirtland for years.   Because of him, we were able to get into many places we would not have otherwise.   He was great and seemed to know everything about everything that happened in the Johnson home and in Kirtland.
I liked a statement he said to us many times: "God chose to appear in small and simple circumstances: the manger,  the grove, and this room in the John Johnson farmhome in rural Ohio."

I think for the most part, we as members of the Church are unaware of the many visitations of the Savior to His people.  He leads this Church and is not only very aware of what is going on, but is personally involved.  Many early Saints saw the Savior or were present when He was and felt of His presence. The John Johnson revelation room was one of those sacred and hallowed places on this earth.

24Behold, I am God and have spoken it, and it is of me

Section 76: Vision of the Three Degrees of Glory

One of the greatest doctrinal revelations given in this dispensation.
Joseph and Sidney saw the Savior and conversed with Him:

14 Of whom we bear record; and the record which we bear is the fulness of the gospel of Jesus Christ, who is the Son, whom we saw and with whom we conversed in the heavenly vision.

22 And now, after the many testimonies which have been given of him, this is the testimony, last of all, which we give of him: That he lives!

23 For we saw him, even on the right hand of God; and we heard the voice bearing record that he is the Only Begotten of the Father—

24 That by him, and through him, and of him, the worlds are and were created, and the inhabitants thereof are begotten sons and daughters unto God. 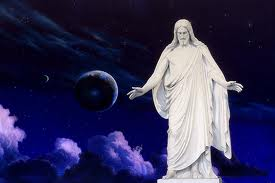