Some background information on Eliza and Lorenzo

Eliza Roxcy Snow Young -(January 21, 1804-December 5, 1887) is one of the most well-known women of Church History.  She  was a renowned poet writing hundreds of poems, a school teacher, and 2nd Relief Society General President. She is most knows today for her poems, which are found in our Hymn book:
Eliza was baptized in 1835 at the age of 30. She moved to Kirtland, Ohio, which was the headquarters of the Church at that time. She worked as a school teacher there. She donated a large sum of money to the building of the Kirtland Temple. To show their appreciation, the building committee provided Eliza with "a very nice lot near the temple with a fruit tree,  a spring running through the property, and  a house that accommodated two families."

From Eliza's diary we read,

"I was sealed to the prophet, Joseph Smith, for time and eternity in accordance with the celestial law of marriage which God had revealed.... This, one of the most important events of my life, I have never had cause to regret."

Throughout her life Eliza referred to Joseph as "her first and only love . . . the choice of her heart and the crown of her life." and when Joseph was martyred in 1844 she was so overcome by grief that she could not eat or sleep and even pled with the Lord to allow her to die. It was during this time of grieving that Joseph appeared to her in vision and told her that she must not desire to die. He then explained that her mission on earth was not yet completed and counseled her to be of good cheer and service to those around her. (source)

Though this marriage was one of convenience and respect, it provided Eliza with security after the death of Joseph. When Eliza arrived in the Salt Lake Valley in 1847, Brigham arranged for her to live in a log cabin with Clara Decker, one of his other plural wives. Then, in 1856, he moved Eliza into the Lion House which he had built to house many of his wives and children. Brigham highly respected Eliza's intellect and valued her opinion. She always sat on his right side at the dinner table and during family prayer.

Lorenzo joined the Church in 1836 at the age of 22. At the time the Prophet Joseph Smith was living in Hiram, Ohio in the John Johnson farm about 4 miles away.

At age 18 Lorenzo attended a meeting at the John Johnson farm. There Joseph Smith spoke to a crowd of about 200 people. He was very moved by this experience, but it was another 4 years before he was baptized.

He mentions being "particularly stirred by the counsel of Joseph Smith Senior who said to him 'You will become as great as you can possibly wish-even as great as God, and cannot wish to be greater'" (Biography and Family Record of Lorenzo Snow)

Lorenzo has an extensive history from the time of his conversion, until his death. We are most familiar with his key role as prophet restoring the principle of tithing.  The setting for this revelation was in St. George, Utah.  During a serious drought, the members had fasted and prayed for rain.  Through revelation, President Snow, taught them that if they would pay their tithing, they would have rain.  And they did.  This experience was later made into the church movie,  "The Windows of Heaven".

﻿
One of the unexpected surprises of our tour was going inside the childhood home of Lorenzo and Eliza Snow.  It wasn't on our schedule, although I think our tour guides knew it could be a possibility but didn't tell us. It was a great surprise for me.

We were in Mantua, Ohio and our tour bus went down some small country roads until we came to this historic marker which was on the side of the road right in front of the Snow home. 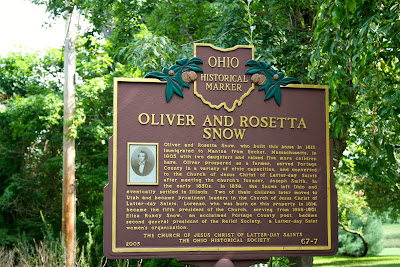 As we all got out to read the sign and get a quick look of the Snow home, the owners came out.  Though not members of our faith, they invited us in to tour the home.  Keep in mind this is a tour bus load with 50 + people.  Who does that?

For me, this was one of the greatest treats of the tour. 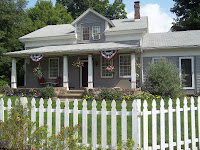 The home has not passed through the hands of many owners and is very much intact to the original floor plan. The owners also have taken great care of the home and strive to decorate and keep it up as it once was, mixed with  modern day conveniences.  A lot of money had been invested into the home to keep it up and have it reflect that time period.

I was very impressed by the owners. Here they were, not members of our faith, no testimony of our church history, yet they had this deep respect for the Snow family. The home was almost a sanctuary  to honor the Snow family. Very surprising and impressive.


Before leaving all 50 of us gathered on the driveway in front of the house and sang, "O My Father" There was a Mormon Tabernacle Choir member amongst our group, so hopefully it sounded okay.


O my Father, thou that dwellest
In the high and glorious place,
When shall I regain thy presence
And again behold thy face?
In thy holy habitation,
Did my spirit once reside?
In my first primeval childhood
Was I nurtured near thy side?

For a wise and glorious purpose
Thou hast placed me here on earth
And withheld the recollection
Of my former friends and birth;
Yet ofttimes a secret something
Whispered, "You're a stranger here,"
And I felt that I had wandered
From a more exalted sphere.

I had learned to call thee Father,
Thru thy Spirit from on high,
But, until the key of knowledge
Was restored, I knew not why.
In the heav'ns are parents single?
No, the thought makes reason stare!
Truth is reason; truth eternal
Tells me I've a mother there.
When I leave this frail existence,
When I lay this mortal by,
Father, Mother, may I meet you
In your royal courts on high?
Then, at length, when I've completed
All you sent me forth to do,
With your mutual approbation
Let me come and dwell with you.


Eliza Snow wrote the lyrics just after her own father's death and a year after Joseph's.
The "key of knowledge"  is the fulness of the gospel restored to the earth.

This hymn teaches that: God is literally the Father of our spirits, and that we are literally His children. It is also the only hymn that talks about having a Mother in heaven.

Having this knowledge changes everything.  We know how to approach God in prayer. We know we can. We know He lives. We know He is there. We know He cares, and that He hears and answers prayers.  We know we are His children, He knows us by name, He knows the very details of our lives, and we know that He loves us deeply.

This is from that "key of knowledge" restored to us through the Prophet Joseph Smith.

I am grateful for what Joseph taught and for the knowledge and testimony I have of this gospel of our Heavenly Father.