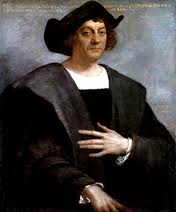 Columbus Day was on Monday, and it seemed to kind of come and go without even a thought.

What are your feelings about Columbus?

To me, he was a man who was guided and directed by God who had an important work to do in his time. And he did what he was fore-ordained to do.

In the Book of Mormon, Nephi actually had a vision of a man who we believe to be Columbus.

* note that the Spirit came upon him

Others, like Columbus were also led by the hand of God:


1 Nephi 13:13 "And it came to pass that I beheld the Spirit of God, that it wrought upon other Gentiles; and they went forth out of captivity, upon the many waters. "

The Lord had a purpose for His children and for this earth, and these people were key in that plan.

President Gordon B. Hinckley in his talk Building Your Tabernacle said this about Columbus:

"I recognize that in this anniversary year a host of critics have spoken out against him. I do not dispute that there were others who came to this Western Hemisphere before him. But it was he who in faith lighted a lamp to look for a new way to China and who in the process discovered America. His was an awesome undertaking—to sail west across the unknown seas farther than any before him of his generation. He it was who, in spite of the terror of the unknown and the complaints and near mutiny of his crew, sailed on with frequent prayers to the Almighty for guidance. In his reports to the sovereigns of Spain, Columbus repeatedly asserted that his voyage was for the glory of God and the spread of the Christian faith. Properly do we honor him for his unyielding strength in the face of uncertainty and danger."

To add another perspective, in the Book of Prophecies [a book I want to own] Columbus tells how he was visited by an angel. Did you know also that Columbus was a Jew?  Kind of interesting!

Columbus wasn't alone in this.

George Washington says he was visited by an angel while at Valley Forge.

These were men of God, who trusted Him and had an important mission to perform on this earth. So important that "an angel visited them" !  Very awesome thoughts.


As we think back to the days of Columbus, George Washington, the Revolutionary war, Civil War,and so on... we are awe-struck by who they were and  the times they lived through.

We are living in times that THEY would have wanted to read about and see. The times we live in now are as exciting and epic as in any time time period in history

The Lord has always had His Hand of Providence over His people during all time periods of the earth.

He is in charge--a very comforting thought.