The Name of our Church

The official name of our church is The Church of Jesus Christ of Latter-day Saints. "The Mormons" is actually a nickname given to us because of our belief in  The Book of Mormon,  Mormon was a prophet-historian and was the one who abridged all the ancient records into the book called The Book of Mormon. I'll talk more about that later. 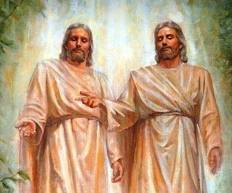 What makes us different than almost any other religion
is our belief in God.


Most people believe in some sort of a Supreme Being although they may call him by different names. We know that God lives and I am excited to share with you my feelings about Him.

"We believe in God the Eternal Father, and in His Son Jesus Christ, and in the Holy Ghost." [Article of Faith 1]

We believe in what is referred to as the Godhead.

The Godhead consists of three separate beings who are all Gods: God-our Heavenly Father, Jesus Christ-His Son, and the Holy Ghost. You have most likely heard of each and everyone of these.  Most Christain religions believe in God-Jesus-Christ-and the Holy Ghost as ONE person or one being without a form, who fill the immense of space.

We believe as members of The Church of Jesus Christ of Latter-day Saints that they are three separate beings,  but are one in purpose.  God, our Heavenly Father, and His Son Jesus Christ both have perfected immortal bodies of flesh and bone that resemble our own bodies.  The Holy Ghost is a personage of Spirit.

A great example of this from the scriptures is at the baptism of Jesus Christ:

When John the Baptist baptized Jesus, God the Father's voice was heard from heaven, and the Holy Ghost descended like a dove. In this example, all three members of the Godhead were present at one moment. They were not one God, but three separate Beings.


God is our Heavenly Father.

We are His children. We believe we lived with Him before we came to this earth as spirits. He knew us then as His children. We knew Him as our Father. He presented a plan to us that would enable us to come to earth and grow, learn and be tested and eventually return back to His presence and become like Him.

God had a great purpose and plan for each of our lives.  We also believe that family is central to the God's plan for us and we each have an eternal destiny as families.


God is an all-wise, and all-powerful being. He is merciful, kind, and just. I have personally felt His mercy and His love. I know He is real and that He lives.  We can have faith in Him.  One of my favorite scriptures from The Book of Mormon is:


Jesus Christ is our Savior

We believe in Jesus Christ as the beloved Son of God.  We believe He came down to earth was born of Mary, lived a perfect life without any sin, and showed us the way in all things as written in the Bible.  Central to the plan of our Heavenly Father is the Atonement of Jesus Christ.  The Atonement included His suffering in the Garden of Gethsemane as well as His suffering and death on the cross.  Through the Atonement we can be freed from the burden of our sins and develop faith and strength to face our trials.

The Holy Ghost
Unlike God the Father, and Jesus Christ His Son who have tangible bodies of flesh and bone, the Holy Ghost is a personage of spirit. He is also a member of the Godhead andhis  role is to testify of Jesus Christ, and to testify truth.  He communicates with us through feelings that come into our hearts and mind. We can recognize and feel when something is true and right by the power of the Holy Ghost.


Two Book of Mormon missionaries, Ammon and Aaron, taught people who did not have a Christian background about God and how to pray. You can read their experience in  Alma 18:24-40 and Alma 22:4-23﻿

Other quick references to what we believe: